How does competition influence the evolution of eye size? In this Insight, Shannon Beston discusses her recent paper, Natural selection favours a larger eye in response to increased competition in natural populations of a vertebrate.

What is the background behind your paper?

How is your paper new or different from other work in this area?

Most research that has been completed on eye size and eye size evolution as it relates to various ecological factors has really evaluated patterns across species. Studies that have looked at within species patterns usually make comparisons between populations. In this paper we take the next step and can actually begin to understand what it means to have a larger eye or a smaller eye and how that is linked to organismal fitness. The current body of literature hasn’t done much empirical work, so I think that is how this paper really is unique.

Does this article raise any new research questions?

es! Much of the literature has really focused on how light drives variation in eye size, and that makes sense because the eye is built to take in light, that’s how we see. But I think what a lot of my dissertation work, as well as this paper, has shown is that there are other potentially important ecological factors that can select for variation in eye size. One of the most surprising findings from this paper is that competition, rather than predation, may be the key driver of eye size evolution in this system. And there is so much more we can now look at. We still don’t know how eye size directly relates to visual aptitude in this system. Getting a better handle on how eye size is linked to vision, as well as how it influences behaviors like foraging are key next steps in this line of research.

How did you get involved in ecology?

I had a really fantastic undergraduate experience. Hobart and William Smith Colleges, where I completed my undergrad, had opportunities for students to engage in summer research with faculty members. The summer before my junior year I was lucky enough to get one of these positions and I spent the summer electrofishing tributaries in the Seneca Lake watershed. This was when I realized how much I love being in the field. During this time, we found that many of the fish were heavily infected with a parasite. I was able to then carry out an independent project focused on parasite ecology through the Honors program at HWS for the next year or so. It was then that I realized I loved the scientific process – asking questions, designing experiments, carrying those experiments out, and then sharing my findings. Those experiences made pursuing a PhD in evolutionary ecology a no brainer. 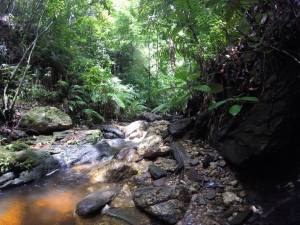 What is the best thing about being an ecologist?

I would say the best thing about being an ecologist is getting to visit and work in some amazing places. Most of my PhD work took place in Trinidad and as a result I was able to spend time exploring in the jungle and seeing amazing wildlife. Things I probably would have never done if it weren’t for my job.