In Insights we discover the story (and the people) behind a recent publication in Functional Ecology: what inspired the authors to do the research, how did the project develop and what wider impact might the work have?

First, may I congratulate you– you have published three papers in Functional Ecology over the last few weeks as a result of your work on Tank Bromeliads. How do these works relate to each other and how do they differ?

Actually, it’s all teamwork involving North-American, South-American and European researchers who collaborate within the Bromeliad Working Group. Constraints on the functional trait space of aquatic invertebrates in bromeliads and Ecological mechanisms and phylogeny shape invertebrate stoichiometry: a test using detritus-based food webs across Central and South America relate to each other in that we examined variation in functional and elemental traits respectively, across bromeliad invertebrate species. We asked whether ecological strategies of invertebrate species, and their carbon, nitrogen and phosphorus composition, depend on their position on the evolutionary tree of life, on environmental conditions, or on both types of constraints. Both explanations were supported by our data. In Constraints on the functional trait space of aquatic invertebrates in bromeliads, we further showed that ecological strategies of species are strongly aligned with their position on the tree of life, suggesting that the evolution of novel trait combinations is very slow. In Functional traits and environmental conditions predict community isotopic niches and energy pathways across spatial scale, we asked whether the functional traits of species and environmental conditions can explain trophic niches (what organisms eat) at the level of species, food webs, or geographic clusters of food webs. Notably, we found that the variety of trophic niches within an individual food web increased with the difference between species in traits and the amount of detritus in the system, meaning that both traits and environmental conditions can predict the way energy flows in ecological communities.

How did you get involved in studying bromeliads? Why are they so interesting as a study system? 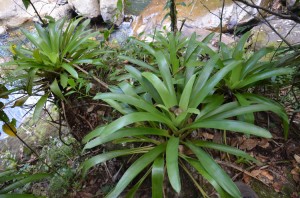 Surprisingly, I was introduced to tank bromeliads and their aquatic biota by a myrmecologist, Prof. Alain Dejean. Twelve years ago, he was leading an inventory of invertebrate diversity in French Guiana, and was looking for someone with skills in freshwater invertebrate taxonomy to study the aquatic communities of tank bromeliads. At this time I was working on stream and pond ecology, and was a bit frustrated by the difficulty in carrying out ecosystem-level experiments with sufficient replication in large macrocosms. For instance, manipulating rainfall or temperature at the whole ecosystem level is impractical in rivers or lakes, so the methodological advantages of before-after control-impact test design or treatment vs. control groups conferred by in situ experiments are not truly achievable. Like other natural microcosms such as rock pools or water-filled tree holes, tank-bromeliads can be seen as miniature lakes. In Neotropical forests, tank bromeliads form freshwater islands in a terrestrial matrix. The rosettes of bromeliads form wells that collect rainwater (up to a few litres) and leaf litter, providing a habitat for aquatic organisms. The leaf litter is the major source of energy for the aquatic food web.  The aquatic food web inhabiting tank-bromeliads consists of diverse microorganisms such as bacteria, algae, fungi and protozoa, and of micro- and macroinvertebrates. Interestingly, the bromeliad food web can be exhaustively sampled or manipulated with high replication across a broad range of neotropical environments. For these reasons, tank bromeliads are relevant model systems for controlled studies of many basic ecosystem processes, from the rules by which communities are assembled to the relationships between diversity and ecosystem functioning.

How does your paper further our understanding on linking functional traits of ecological communities, be it plants, microbes, or invertebrates, to ecosystem functions?

Understanding ecological strategies of communities helps ecologists predict how environmental changes will affect ecosystems. We studied the entire invertebrate fauna of tank bromeliads across the neotropical range of the system, and found that this speciose fauna only utilized a small number of successful strategies within the universe of possible trait combinations. Traits combinations are constrained by physiological trade-offs among traits, by the taxonomic relatedness of species, and by environmental conditions that prevent colonization by species with unsuitable trait combinations in any given ecosystem. This suggest that, despite high taxonomic diversity, ecological communities may have only limited numbers of strategies to cope with environmental change.

I’m don’t think I have the ultimate response to this question, but I have at least a suggestion. Traits operate at different time scales, and at different levels of biological organization. First, physiological and behavioural traits trigger immediate responses to even the smallest changes in the environment, thus allowing persistence of those species that are responsible for the capture and conversion of energy in a system. At the community level, redundancy in functional traits is thought to act as an insurance against disturbance, for many functionally similar species increase the probability that trait combinations are preserved by surviving species. Third, continuance of the ecosystem functions is also dependent on metacommunity dynamics, life cycle and dispersal traits, which allow new individuals to colonize (or recolonize) the system from nearby source patches. In short, I think that a crucial step would be to integrate the experimental and theoretical frameworks of trait-based ecology, ecosystem ecology, and spatial ecology. Perhaps this would help to understand how different scales of biological organisation, organisms, functional community structure, metacommunity, and their interactions, drive ecosystem functions as well as shifts towards new ecosystem states.

How has your career developed over the last few years and what is your current position?

I became a Full Professor in my University in 2005, so my career has mostly developed in terms of academic responsibilities. From 2005 to 2016, I led a large team of community ecologists, where I was instrumental in bringing together microbiologists, plant and animal ecologists and landscape ecologists, with the aim of fostering integrative studies of the roles of biological interactions and environmental conditions in shaping biological diversity. I am currently Deputy-Head of Ecolab, and this is adding administrative and staff management duties to my research and teaching activities.

What achievement are you most proud of?

I feel proud every time one of my students gets his/her first academic position. The merit is mostly due to their talent, but still, I like to think that I’ve contributed to the development of their scientific maturity. In his book “Wonderful life”, Stephen Jay Gould nicely described how the apprenticeship system that prevails in universities traces intellectual lineages. I was lucky to meet some brilliant students; I hope that a bit of my legacy will survive in their work, just like my mentor Prof. Pierre Lavandier influenced my scientific thought.

What do you like most about being an ecologist? What could you happily do without?

Isn’t it a dream job to travel the world to study living organisms and their role in nature? I’m truly fascinated by the beauty of nature and the diversity of lifeforms, and I’m excited by fieldwork and the discovery of results. I really feel that I never worked a single day in my life, I’m just having fun and enjoy every small or big achievement. The other good thing about being an ecologist is that ecologists are usually very approachable persons. I found it easy in my career to establish new national and international collaborations, and I was also lucky to make good friends. I also do like to work with students and early-career researchers. It’s a reciprocal interaction. I hope they like my mentoring style, for they also play a great role in updating my skills. For instance, I learned a lot of coding from PhDs and postdocs. You’ll never go out of touch if you work with young people. Perhaps not surprisingly, I would happily do without the scary amount of paperwork behind even the smallest activity.

How do you balance work and downtime?

In the first years of my career, I used to be a full-time worker ignoring the meaning of “downtime”. Things changed with the births of my son and daughter, who are now 12 and 10. When I’m not teaching or in the field, I’m working on my laptop from early morning to late evening, but I’m also a happy father and husband, have my hobbies, and always have time for a beer with friends. My enthusiasm for ecology, however, keeps me thinking of my ongoing work and future projects at all times.

One thought on “Insights: Régis Céréghino”