In July, Functional Ecology published the Special Feature: A Mechanistic Understanding of Global Change Ecology. We have invited the authors of the papers to write a blogpost on their paper. In this post, Rana El-Sabaawi (Trophic structure in a rapidly urbanizing planet) writes about feeding ecology in the urban jungle. 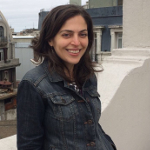 The human population is rapidly urbanizing. Urban development dramatically changes the landscape by fragmenting green spaces and replacing them with concrete and asphalt. Rain runs off these impervious surfaces into local waterways bringing lots of pollutants with it. In some cases, the waterways are already polluted because of inadequate sewage treatment. Cities are also warmer than undeveloped areas. And even a brief stay in the city gives the impression that city animals are different than wild animals. In my own city, I see more crows, raccoons, and pigeons than I see in the surrounding natural areas.

Clearly urbanization affects ecology, by changing the environment and the animals.  The question is how and why?

In my paper, I chose to focus on the urban food web, and on trophic interactions, defined as who eats whom or what. I wanted to summarize what has been done, what we have learned, and more importantly what is still left to learn.

So why trophic ecology? Because it is one of life’s great engines. All organisms need energy, and finding this energy drives their characteristics, behavior and survival. I have also always been curious about what urban animals eat, especially if they rely on food provided by humans intentionally (e.g. bird feeders) or accidentally (e.g. raccoons raiding the garbage and compost, deer eating all the flowers in the garden).

I once saw a crow eating French fries on the sidewalk in front of a restaurant in my neighborhood. I don’t know whether it had stolen the chips or found them in the garbage, but it had a pile of them on the concrete, and a pile of them in its beak, and was aggressively guarding them against other crows and seagulls. It was fascinating to watch, and difficult to forget. Was the dominances of crows in the city related to their ability to find, defend, and digest this strange yet delicious energy-dense food?

Urbanization has dramatic changes on trophic ecology. Most recent studies suggest that urbanization weakens herbivory and predation, while others hint that increases competition. The reasons vary and seem to depend on the particularities of the city. Urbanization changes the balance between nutrients that come from primary production (autochthonous) and nutrients that are subsidized by humans (allochthonous).  In many cities specialized animals are being replaced by generalist omnivores that utilize a variety of resources, including human-subsidizes foods.

But despite the broad trends it is difficult to make generalizations. Why? Cities worldwide have much in common: they are fragmented, polluted, and they have high abundances of opportunistic animals and nonnative plants. But cities also differ in important ways. Desert cities can be greener than the surrounding areas because humans like to keep their lawns, parks, and golf courses green and watered. The opposite is true for a city in a naturally forested area, where urban development fragments and reduces natural areas, making the city less green. The responses to urbanization also vary among different plant and animal species.

Understanding interplay between general urban effects and local (context-specific) effects is an important challenge that can be addressed with experiments and observations that are replicated in multiple cities. A glaring gap was how little experimental work has been done in aquatic urban environments, marine or freshwater.

Urban ecology – fieldwork in the city

Perhaps most fascinating was how little we know about the ecology of urban animals, the ones that do well in cities. It is not clear how they use the city (to find food, shelter, or both). We know little about what cities do to their nutrition – is eating human-subsidized foods good or bad? In some instances feeding on garbage is associated with illness and antisocial behavior, in others it is associated with large abundances. Understanding how relying on human subsidies changes the interactions between urban and non-urban animals is key for understanding how urbanization changes ecology.

Perhaps these gaps in this rapidly growing literature are not so surprising. Sampling in sewage contaminated waters is not fun, nor is it a good way of attracting students to your lab (I speak from experience). Animals that root through the compost, steal chips, eat your garden are hard to love, and that makes them hard to study. But one thing is clear – the urban environment provides interesting and novel venues for studying trophic interactions.

To read more, check out this special feature on urban ecology released by Functional Ecology!