As summer approaches in the UK, it’s time to come out of hibernation (sitting in front of the PC doing data analysis and writing up) and head back out into the field. For me, fieldwork mainly consists of attaching acoustic recorders to trees and then regularly replacing their data cards and batteries over the following weeks. Basically, it’s carrying equipment from one place to another, and spending quite a bit of time up a ladder. Apart from performing vegetation surveys at each site, my fieldwork is therefore relatively straight forward, which is probably for the best as I hadn’t really done any proper fieldwork before starting this project. Coming from a remote sensing background, 30 x 30m of forest was more likely to represent a single pixel in a satellite image rather than a physical location. My previous experience had amounted to standing in the sun with a UAV for a day or dabbling in rivers looking at inverts and restoration projects so were more like day trips.

Having made the transition from field trips to fieldwork over the last two years, one thing I’ve learned is that it’s good to be prepared. You will often be based in remote locations, starting early and finishing late, so if you don’t take everything you need with you, you’ll either have to make do without it or waste valuable time trying to track down somewhere that sells it. So, here are some of the less obvious (to me anyway), yet useful, items I’d recommend to anyone else embarking on their first forays into the field.

Insect-repellent socks: I’d been lucky and never (knowingly) picked up a tick before I started fieldwork. Then I had four within the first two days. My first mistake was a combination of wearing dark trousers (so you can’t see them crawling up your legs) and not tucking my shirt in. After correcting that, two more managed to get through both of the pairs of socks I was wearing. Tick nymphs are incredibly small (imagine a poppy seed with legs) and can get through very small holes, including the weave of thicker socks. Happily, getting some insect-repellent socks seems to have solved this problem—that, and tying string around the bottom of my trouser legs for good measure.

Waterproof trousers: The first day of fieldwork in Germany last year it rained. A lot. Rather foolishly, I didn’t already own a pair of waterproof trousers and was incredibly lucky that a camping store happened to be open just around the corner from the park’s office where I procured their last pair, thus avoiding a thorough soaking. They can get pretty warm in hot weather, but don’t weigh much and you really don’t want to be outdoors all day in wet trousers.

Mobile phone: While taking a mobile phone in case of emergencies is fairly obvious, assuming you can get a signal, it’s worth remembering the many other features included in modern smart phones. In just one device, you potentially have a camera, flashlight, compass, calculator, spirit level and stopwatch at your disposal, and that’s before installing any apps. It might not be ideal for every task but handy if you’ve forgotten to bring, or unexpectedly need, any of the above. 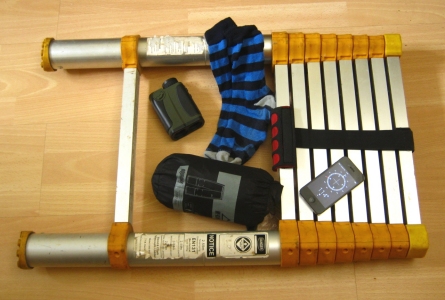 Laser range-finder: If you’re fed up with your 30m measuring tape getting tangled up or caught on brambles then a laser range finder may help. Having one of these was extremely useful for mapping out tree locations within plots, especially in combination with a compass. Even basic models costing about £65, typically made for golfers, are accurate to around a metre and considering the time (and frustration) it saved me dragging a flimsy bit of tape to every tree within twelve 3,000 m2 plots, it was a bargain.

Telescopic ladder: I can say from experience that taking a ladder into the field, particularly forest, is best avoided if possible but if you absolutely need to, try to get a telescopic one… rather than the fold-up type I’m carrying in the photo. They’re a bit heavier but less bulky and much easier to carry, plus they don’t get snagged on vegetation all the time.

If you have any unusual or innovative tips or recommendations for field equipment that you’ve found particularly useful, please feel free to share them in the comments. Until next time, I wish you all a safe, productive and enjoyable field season!