25 years ago, from September 28 to October 1st 1992, about 50 peatland scientists got together in the Hyytiälä Forestry Station in Southern Finland to discuss the latest knowledge on carbon cycling in peatlands. 25 years later, on September 25 to September 28, 2017, a group of over 80 peatland scientists – including some of the 1992 participants: Harri Vasander, Nigel Roulet, Dicky Clymo, Line Rochefort, et al.­–  travelled (back) to Hyytiälä with a similar set of aims. The conference not only looked back at the first peatland meeting in Hyytiälä 25 years ago, but also celebrated the 100th anniversary of Finland.

For me, the journey to this workshop/conference started a good year ago, when I met Harri Vasander at a meeting in the beautiful town of Montpellier. For those who do not know Harri, he is one of the most renowned Finnish peatland scientist, and a very warm and open person. Harri told me about his plan to organise a ‘Boreal Dinner’ in the forest. Though not exactly sure what that would mean, I was immediately captivated by the idea. A year later, I attended what was one of most laid-back conferences I’ve ever been to, with a brilliant combination of (very high level) peatland science, field visits and culture.

The four-day scientific program of the workshop was kicked off by a presentation of Emeritus Prof. Dicky Clymo, who brought us back to the early measurements of peatland carbon cycling (see also https://functionalecologists.com/2017/10/06/hindsight-the-earliest-measurements-of-gas-fluxes-from-a-blanket-bog/). The next day continued with Prof. Nigel Roulet’s thought-provoking keynote on what we have learned on carbon cycling in peatland in the context of climate change over the past 25 years. His lecture was backed-up by a series of oral presentations by world leading peatland scientists,Steve Frolking, Eeva-Stiina Tuittila and Mats Nilsson just to name few, who discussed the effect of climate change on the functioning of peatland ecosystems. Next day, Petra Straková introduced two sessions on plant-soil interaction in peatlands research; sessions that were both populated by early and mid-career scientists. The last day of the conference focussed on peatland restoration and the effects of land-use change on carbon dynamics. None other then Line Rochefort presented her life’s work on enhancing the understanding of how to best restore deteriorated peatlands. Anna Laine, Maria Strack, Laurence Turmel and Ian Strachan followed up Line’s presentation, with a more detailed focus on post peat extraction carbon dynamics. The conference finished by establishing three working groups that will try to answer the following questions:

– How does sampling frequency impacts the annual carbon budget in peatlands?

– How do peatland plant communities translate to carbon dynamics? 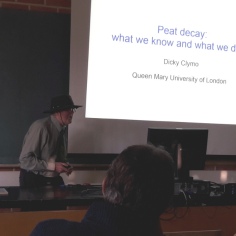 Prof. Clymo delivering his presentations at the Hyytiälä peatland conference.

Prof. Roulet delivering his presentations at the Hyytiälä peatland conference.

Prof. Clymo (left) and Prof. Roulet (middle) delivering their presentations at the Hyytiälä peatland conference.  Marjokaisa Piironen (right) talks about the Sahti tradition on behalf of the Finnish Sahti Society.

A cultural touch to the program

In the evenings, before, during and after the poster sessions, there was plenty of time for Finnish culture. There was a talk on “Sahti: the ‘missing link’ in Finnish cultural history”. Sahti is a type of beer that is top-fermented, hence comparable to ale. It is traditionally made of malted and unmalted grains, and flavoured with hops or juniper berries. Sahti is homebrewed, and hard to get; but if you are lucky enough –like we were– you know who makes a good Sahti. The first poster session kicked of with reading Finnish poetry, whilst the second night’s poster session was closed by a dance performance.

Every day, the scientific sessions were either preceded or followed by a field trip. Home to a SMEAR station, the  Hyytiälä field station provides infrastructure for those we interested in the links between ecosystem processes and atmosphere. Tower measurements on forest gas fluxes are complemented by ecophysiological measurements and plot scale measurements on carbon and nutrient dynamics. The whole site is impressive and equipped with state-of-the-art instruments. A stone’s throw away, the Lakkasuo and Siikaneva peatlands are equally well studied. Where Lakkasuo mainly serves the needs of plant ecologists, the Siikaneva peatland stations are an elaborate network of research infrastructure for studying carbon dynamics. Managed by the Universities of Helsinki and Eastern Finland, eddy covariance flux measurements in the mire and the bog part of the peatland are supplemented by plot scale measurements of gas fluxes and plant community dynamics. The Siikaneva sites are in the process of being added as ICOS – Integrated Carbon Observation System – sites.

While the site visits were focussed on scientific discussion, the organisers still did not forget the cultural experience. We were treated with champagne along a lake where a lake troll dwells, and another dance show was performed; this time in the bog. 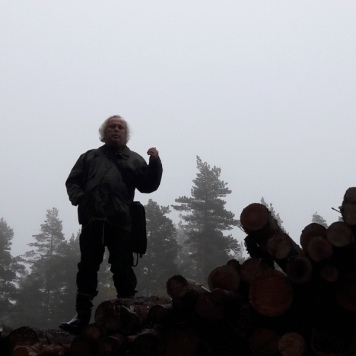 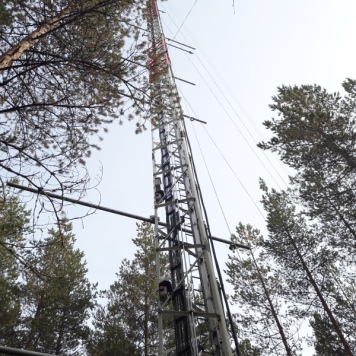 Finland and sauna: the two are inseparable. It may be no surprise that the program mentioned a visit to sauna every night. But of course, the organisation first wanted us to learn a bit about the etymological, cultural, and physical aspects of sauna. Finns take sauna seriously….very seriously!  Again, it may not come as a surprise that the physical aspects of sauna have been extensively researched, and we were told about these studies in a real lecture (and even got papers about it to read before coming to Hyytiälä). The seriousness of the subject was, however, toned down a bit by the humoristic approach Timo Vesala, Professor of Meteorology and conference organiser, took in his presentation about sauna tradition (see also the documentary by Joonas Berghäll and Mika Hotakainen,‘Steam of Life’;.

There was also a traditional solution to an old problem: women and men were separated while going to sauna, keeping important conversations apart, but in Hyytiälä, a kota (a traditional rustic hut, where everyone sits around a fire facing each other), has been built in the middle the of men’s and women’s sauna, and served as a perfect place for meeting up, having a drink, and talking about science and non-science topics.

Every conference has an official conference dinner. I have been to really good ones; I have been to really boring ones. But this conference dinner is one I will never forget. This conference dinner was the best and most enjoyable I have been to. Having been warned to put on old and warm clothes, we were taken to a forest where we had a boreal dinner. We were welcomed with a shot of vodka (some appreciated this more then others) after which we were seated on logs. In the middle, two large logs were laid together and a slow fire burned between these logs, keeping us warm in the rapidly chilling night. Dinner was served on sustainable plates and consisted of local foods and drinks. The atmosphere was amazingly relaxed, and continued until late. A path of candles through the forest guided us to sauna (of course) and later kota for a small after party.

This was my first conference in the Hyytiälä field station, but hopefully not the last. The organizers – Harri Vasander, Timo Vesala, Raija Laiho, Eeva-Stiina Tuittila, and Aino Korrensalo –  did a fantastic job, not only in putting together a fantastic meeting, but also in representing Finland. I met a whole lot of new friends and will not easily forget this meeting. 25 years from now, when we will meet again in Hyytiälä, I hope we can celebrate that this conference has made a significant contribution to our understanding on the functioning of peatlands in the context of a changing climate.

Bjorn Robroek is the blog editor for Functional Ecologists.