Dr Francois-Xavier Joly  is a Postdoctoral Research Assistant at the University of Stirling, Scotland. He was recently shortlisted for Functional Ecology’s Haldane Prize for Early Career Researchers.

In this Insight, he talks about his shortlisted paper, Litter conversion into detritivore faeces reshuffles the quality control over C and N dynamics during decomposition, as well the best – and worst – parts of being an ecologist.

How did you come up with the idea for it?
The idea behind this paper emerged during my PhD, over a coffee break with my officemate, Mathieu Coulis, who was finishing his PhD on the role of soil fauna in litter decomposition at the time. He was explaining how one of the most frequently mentioned effects of soil fauna on decomposition, the litter fragmentation that stimulates microbial activity and accelerates decomposition, was in fact a belief with only contrasting support from a handful of studies. We then decided to address this knowledge gap together, designed an experiment, and received the green light from Stephan Hättenschwiler, our PhD supervisor. We tested the first part of this common belief, i.e. that litter conversion into faeces stimulates microbial activity, and found that the conversion effect on microbial activity depended on the type of litter converted, thereby partly supporting the concept. Following this first experiment, I decided to test the second part of the concept: does this conversion of litter into faeces result in changes in decomposition rates?
What are the key messages of your article?
In this experiment, we measured faeces characteristics (to quantify fragmentation) and C and N loss rates (to quantity decomposition), compared these characteristics and rates between litter and faeces of one millipede species, and used a trait-based approach to explain faeces decomposition rates from the litter and faeces characteristics. We found that litter conversion into faeces did accelerate both C and N loss rates, thus providing the first ever support for this commonly held belief. We also clarified the mechanisms by showing that this accelerated decomposition was related to an increase in surface area at the scale of the faeces particles, and an increase in faecal pellet density. 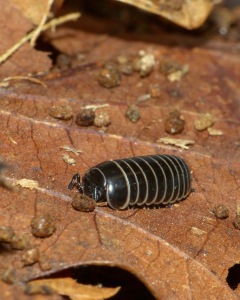 What is the next step in this field?
Since the results of our paper reflect the fragmentation effect by just one millipede species, Glomeris marginata, it is now important to check whether this effect is consistent across detritivore species. After submitting this paper to Functional Ecology, I applied for a small research grant to the British Ecology Society, to expand the previous experiment to a wide range of soil detritivores. The proposal was funded, and I spent several days in the field collecting thousands of soil animals from six different species (millipedes, isopods and snails). I then fed them six different types of litter separately, creating a collection of 36 types of faecal pellets, on which I measured a large number of faecal pellet characteristics, including fragmentation and decomposition rates. This will inform on whether the type of litter ingested or detritivore identity is the most important factor for faecal pellet quality and decomposition.

What project/article are you most proud of?

I suppose it would have to be the overall line of work on detritivore faeces that started as a side-project during my PhD and continues as another side-project in my current postdoc position. It is the result of a series of studies that I set up on the side from my own ideas, with nearly no funding but a good amount of creativity. This work led my very first first-author paper, and, in turn, to this more advanced paper in Functional Ecology, which was rather well received, particularly thanks to the FE Spotlight article by Elly Morriën and Cindy Prescott and this short-listing for the Haldane Prize. This also gave me the preliminary results I needed to submit and obtain my very first grant.
What is the best thing about being an ecologist?

The best thing for me is the diversity of tasks that is required to be an ecologist: being out in the field and collecting samples, playing with DIY tools making custom-made microcosms for a new study, coding and exploring datasets, presenting new results and meeting other scientists at conferences/seminars, thinking about the best way to pitch that next paper, envisioning new concepts, teaching and supervising students, and even basic tasks like weighing hundreds of samples on a balance when my brain has had enough of the rest. This diversity of tasks requires learning new things every day, developing new and diverse skills and is the best antidote against getting tired of the job.

What is the worst thing about being an ecologist?

The worst thing for me, as an early-career researcher in ecology, is the job insecurity and the associated difficulty in settling somewhere until I get a reasonably long-term/permanent position. Joining different labs across the world is certainly an enriching experience, but it comes at a serious cost. Recreating a social circle in a new environment, staying in touch with the friends that I now have all over the world, being with my family for the big events (and the small ones, for that matter): all of these are difficulties that often make me wonder whether the good aspects of the job are really worth it.

With one year left on my current contract, I am now writing fellowship applications to be able to focus on the role of detritivores on soil processes. I would like to investigate their role beyond decomposition, to see how they affect soil organic matter formation.

What do you do in your spare time?

Here in Scotland, I spend most of my spare time exploring the country in any way that I can. I often trail run in the hills around our beautiful campus, rock-climb at the local crag or gym, and I spend most of my weekends out in the highlands, camping and hiking as many hills as possible. These are the activities that I find very effective in helping me disconnect from work, recharge the batteries, and start work again with a fresh mind and eagerness to keep going. For this, Scotland is the perfect playground.