In Insights we discover the story (and the people) behind a recent publication in Functional Ecology: what inspired the authors to do the research, how did the project develop and what wider impact might the work have?

In this week’s Insights, Manrico Sebastiano from the University of Antwerp (Belgium) talks about his paper on the mechanisms that underlie the impact of viral disease. These mechanisms are relatively unknown and studies tend to focus on a few conventional laboratory species. Sebastiano and his colleagues have set-out to study the effects of resveratrol on viral infections in the free-living Magnificent frigatebird.

Can you briefly explain the main findings of your work?

In natural environments, animals exposed to infectious diseases often undergo stress due to exposure to contaminants, malnourishment or poor nutritional intake. One of the mechanisms suspected to translate environmental stressful stimuli into increased vulnerability to infectious disease outbreaks is oxidative stress, a physiological disequilibrium between the level of antioxidants and free radicals. We administered resveratrol pills, a powerful antioxidant with antiviral proprieties, to Magnificent frigatebird chicks that are facing a lethal viral disease. Thanks to the treatment, we were able to stimulate the production of antioxidants and inflammatory proteins and to limit the generation of oxidative damage, which might be of fundamental significance for the protection of chicks exposed to viral diseases. A longer-term treatment would prove useful in understanding if these effects are long-lasting and if sick frigatebird chicks can recover from the disease, since in most cases they appear to have no chances of recovery.

(You can read the lay summary for this paper here.)

Resveratrol became famous for the so-called “French paradox”, which refers to the observation that although French people have a diet rich in saturated fatty acids from the high consumption of cheese, they show a low incidence in hearth diseases. There is still a lot of speculation around the topic, but several studies have suggested that the negative effects of fat consumptions are buffered by the antioxidant action of resveratrol inside wine.

How does your paper further our understanding of how viral disease in the natural environment may be controlled?

Our results were very clear and demonstrate how a physiological state of oxidative stress can lead to the deterioration of health and the occurrence of diseases. We have provided evidence that antioxidants are essential for the preservation of a balanced oxidative status during diseases, which although already proved in human studies or on laboratory animals, has been never demonstrated before on free-living animals. Our study suggests to deepen into the relationship between diet and infectious diseases in animal populations, but also to clarify whether the beneficial effects of these dietary molecules such as resveratrol are primary due to their antioxidant or antiviral properties, or both.

A lot of people take resveratrol as a supplement. Do you think that will have an effect on the immune system of free-living species?

Several recent studies have highlighted that an increased intake of resveratrol has important positive effects on immune cells and for the prevention of several human disorders, thus its use as a dietary supplement has rapidly increased in recent years. Resveratrol is part of the polyphenols family, a class of natural organic chemicals that are abundant in fruit, seeds and vegetables, that are the primary source of food for many free-living species. Therefore, I have no doubt that resveratrol can also have a positive effect on the immune system of free-living animals that take it through diet (e.g. birds, deer, and monkeys among many others).

How has your career developed over the last few years and what is your current position?

At the beginning of my PhD, I felt a bit uncertain about the future due to high competition, the need to gain credibility in the scientific world and constant search for funding, but today, although I’m still a PhD student, I think my career has developed a lot especially considering the past two years. I feel motivated to continue in research if the right opportunities will come.

How did you get involved in studying the effects of a drug on viral repression in the Magnificent frigatebird?

I have always felt indebted to the animal world and have always been fascinated by the possibility of finding a way to limit stressors to which free-living animals are exposed. Right after my Master degree, I was motivated and keen to find a job that would really satisfy my desires and passions, but honestly, I never thought about doing a PhD until I met my actual supervisors and we had the idea to write a proposal that led to this project. I have to admit that everything was to some extent a bit unplanned, but I am very happy about how things are going.

What do you like most about being an ecologist? What could you happily do without? 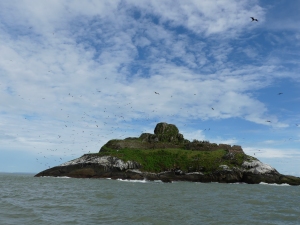 I like that when you develop new ideas, you can actually plan the field work to collect data so you can confirm or deny your hypotheses. This really gives me a lot of motivation. I often think about my possibilities outside academia, and I don’t feel stressed about it. If I will not succeed in science, I think I can easily be happy with many different jobs. If I were to choose, maybe I would open a small family restaurant or become a beekeeper, but I will think about it when it’s time.

What achievement are you most proud of?

In the second year of my PhD, my supervisor was leading a research project on the Western Tarsier in Borneo. I really wanted to participate, but since the project was outside my PhD topic, I could not use the money allocated to it nor I could cover the high expenses for the travel and accommodation with my personal money. However, although I was a little disappointed, I decided to go anyway. A few days later I received the great news that I was awarded a scholarship for the research project, and this really motivated me a lot and made me understand that if you want something, if you really want it, you never have to give up.

How do you balance work and downtime?

As scientists, we have the great possibility to be independent and to plan and schedule our own working hours most of the time. I practice sport almost every day, I go out a lot with colleagues and friends, and as soon as I can, I try to go back to Rome for a few days, where there are my relatives, my closest friends and my biggest passions (besides science of course), my motorcycle and my go-kart. I don’t put work ahead of everything and this reflects positively on my mood outside work and helps me to be efficient and positive at work.

Follow Functional Ecologists – A blog for the people behind the research on WordPress.com