In Insights we discover the story behind and beyond a recent publication in Functional Ecology. What inspired the authors to do the research, how did the project develop and what implications might their results have on the scientific community and on society?

This week, Dr Gail Schofield from the Centre of Integrative Ecology at Deakin University, Warrnambool in Australia talks about her paper on the use of drones to detect mating patterns in loggerhead sea turtles.

Read a plain language summary of the paper here. 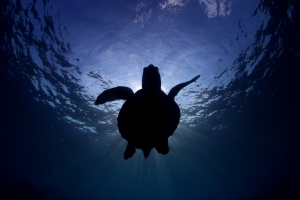 Can you briefly explain your field of expertise and why it is important?

My research focuses on understanding the movement, behaviour and ecology of marine vertebrates to develop strategies to improve conservation effort, as well as to elucidate the potential effects of various environmental parameters, including climate change.

Can you give a brief summary of the paper?

Research on sea turtles is strongly focused on collecting information on beaches about nesting females, their eggs and offspring. The sex of sea turtle offspring is dependent on sand temperature: the warmer the sand, the more females are produced, with many more females than males being produced globally. Yet, we do not know how offspring sex ratios translate into those of reproductively active adults at breeding sites. Monitoring sea turtles in the marine environment is difficult, particularly when gathering data over extended periods, wide areas and under variable sea and weather conditions. We used drones i.e. unmanned aerial vehicles (UAVs) to resolve the knowledge gap on this elusive aspect of sea turtle reproductive ecology. 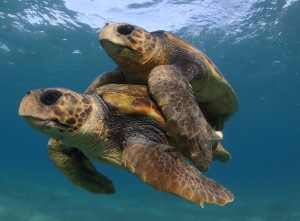 How did you get to the idea to study the mating behaviour of sea turtles, sea animals, from the air?

We always knew we only obtained a snapshot of what was happening during breeding from devices attached to turtles (too few to get population level insights) and boat surveys, which can only be conducted in fair weather conditions. For the last 10 years, I have been looking for the optimal technology to obtain a bird’s eye view of the breeding habitat where I worked, but there were always limitations with different technologies (poor resolution, fixed in one location etc. etc.). Thus, as soon as drones became accessible, I knew this was the ideal opportunity to test various theories and assumptions we have developed through research conducted by our team and others with respect to turtle numbers, distribution, encounter rates and interactions, etc…

How did your ideas for this research evolve during the project? Can you give some more information about how difficult it is to sex sea turtles from drone images?

Prior to initiating surveys, our main objective was to determine the relative numbers of males and females through the breeding period to investigate encounter rates, as this population exhibits extremely high multiple paternity, implying extremely high encounter rates and tight nearshore aggregations. However, due to starting surveys when turtle numbers were low, we were able to record both the relative numbers of males and females as well as how this ratio changes through the breeding period. This constantly changing ratio has been detected in many other wildlife species, including insects. The clear (and anticipated) drop in male numbers (see Schofield et al. 2013), along with the peak followed by a plateau in female numbers (because they remain to lay multiple clutches) led us to consider possible triggers for male departure, i.e. a drop in female receptivity, despite numbers being high, leading to increasing failures in encounters. Thus, we investigated the effect of including a 10 day period of receptivity (a period suggested by previous studies). It was very exciting drawing together different fields of research on sea turtles and other wildlife to elucidate the observed trends.

It is very easy to sex male sea turtles from drone images, as adult males have long tails, as long as you fly the drone at the appropriate height and have high resolution imagery. During breeding, males patrol for females, with this behaviour involving males swimming parallel to shore with their tail extended for much of the breeding period, seeking females. I have confirmed this behaviour through direct inwater observations when monitoring males by swimming and from boats.

In your methodology to quantify the operational sex ratio in the sea turtle population, you assume the influx of females in your study area to be receptive females. Would the data from your research also be able to tell if that assumption is right? Perhaps phrased differently, can we tell the difference between receptive and non-receptive females, based on drone imaging?

We assumed that females entering the area had not been mated, with this assumption being supported by the high mating/courtship frequency with the first influx of females. However, some literature suggests that females might be intercepted during migration, although this is likely to be in low numbers as the chances of encounter in the wider ocean basin are extremely slim. Logically, aggregations form to facilitate mating; thus, the majority of mating is likely to occur in the study area for this population, particularly as very high multiple paternity has been previously detected in our population. If we were able to identify unique individuals within a given year (say from their carapace markings, like barnacles), and drone imaging was conducted daily, it might be possible to detect the change in receptivity of individuals based on their reactions to males (i.e. allowing mating versus avoidance manoeuvres), which are clearly visible from drone imaging. To confirm the sexual status of females invasive techniques would be required; thus, it would be great for a study site where females are subject to ultrasound to determine their sexual status were to combine this work with drone imaging.

What new knowledge the gaps did your research expose?

First, we showed that the concept of the operational sex ratio is being over simplified for sea turtles, and that we cannot assume that it is simply a ratio of all females versus all males that breed in a given year. Our study also showed that drones provide a way of inferring the numbers of males at breeding grounds, as well as other habitats (e.g. foraging and wintering grounds). It is essential to determine male numbers in both large and small breeding populations, in parallel to other demographic parameters such as genetic diversity, to elucidate the minimum number of males required to maintain population viability. This information is extremely important as global warming is causing already female biased offspring sex ratios to become further skewed.

How do your findings translate to other ecological research disciplines?

Our research on sea turtles supports previous studies on populations of other wildlife that are more easy to observe directly (like insects), showing that the relative numbers of males and females changes through the season driving different types of behaviour, including the intensity of competition between males and decisions to depart. Our research shows that the elusive aspects of the ecology of different wildlife could be explored by using UAVs when adults might exhibit visually detectable differences, such as sexual dimorphism, external body characteristics or grouping tendencies.

­­What would be your advice/message to conservationists or policy makers based on your results? Where should they put their effort if protecting breeding habitat for sea turtles?

I, along with my coauthors, believe drones provide an effective way of obtaining different levels of information that are of use for managers. First, drones provide an effective way of quickly surveying coastal habitats and identifying potential hotspots where turtles assimilate to breed, or forage. Second, they can be used to determine seasonal variation in the relative numbers of different sea turtle species, sexes and size classes in a given area. This information could be further used to adjust the strength of protective legislation depending on the time of year/numbers of individuals, facilitating adaptive management. I think the full potential of drones has yet to be realised, but that this potential can only be realised by carefully formulating research/conservation management questions.

As a final question, a bit more of a personal one. If you are not at work, researching loggerhead sea turtles, what do you like to do?

When visiting my field site (Zakynthos in Greece), my four-year old son wants to participate, so we swim daily with sea turtles, as well as all sorts of other marine life. My passion is hiking (and I have even published a book of walks on Zakynthos), so we regularly try out different trails wherever we are based to experience a wide variety of habitats, plants and wildlife.